When The Dead South first played here, there were about ten people in the audience. An estimated two and a half thousand fans were enthusiastically looking forward to them in the sold-out Karlín Forum on Saturday, November 20th. In Prague, in the middle of Europe. A band from somewhere in Canada playing bluegrass traditionally, without modern updates. That says something.

But before the band entered the stage, their worldwide career was kicked by a funny clip to the song “In Hell, I’ll Be In The Good Company”, the gradually filling Forum Karlín belonged to the forerunners. The evening was opened by the German singer Max Paul Maria. The impression was a bit embarrassing, especially when he was helping himself with pre-recorded rhythmic bases. It seemed strange, insincere to the songwriter. It was much better in the songs, when he turned off the annoying underdrawing and only played it himself. At that moment, quality came to the surface – voice and melodic ideas. For the second time, the Canadian band Shred Kelly, the set in the Prague hall was said to be the biggest concert of his career. And they dealt with this fact without nervousness, confidently and with undisguised enthusiasm. Fleet Foxes and Mumford & Sons sound unmistakably in their music, but the five have their own charm and energy, which they are not afraid to pass on. Good follow-up! 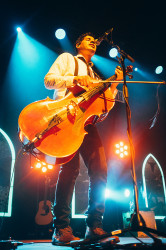 The Dead South is a phenomenon that cuts across age and genre categories. Well-deserved folk singers met in Karlín, a youth that one would expect completely different from country / bluegrass (for example, some dreamy indie pop), but also very small children with their parents. There were devoted fans of the band dressed in combinations of black pants, white shirts and kshand, but metal t-shirts were also visible. And they all had the same fun. How often are visitors (not just rippling to the rhythm, but seriously dancing) seen in the beer queue? These Canadians are not great showmen. Instrumentally difficult music is usually clearly tied to instruments and microphones, the best element on stage is such an overgrown woodpecker with a mandolin, Scott Pringle, who would not get lost in a much harder event. Visually, it added a dynamic dynamic to the visually relatively static performance. And here is the great compliment to the illuminator. Capturing all the stop-times, accelerations and decelerations that The Dead South’s music is full of is an art that requires experience and an inner connection with the music. And the sounder deserves the same praise, who managed to catch a great sound in which no jingle of the banjo or the rhythmic jam of the mandolin was lost. Too bad only the kick, which sometimes rumbled unnecessarily much. 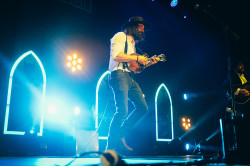 In a busy, hour-long and forty-minute set, all three of the group’s albums were evenly represented, with an emphasis on faster pieces. A pleasant slowdown was, for example, “The Good Lord” with perfectly managed harmonies and, of course, a famous hit video clip, which provoked a stormy response – and also a forest of glowing phone screens, unfortunately. The Dead South may have made it that way. The concert, which has been moved several times, took place at a time when the pandemic situation is deteriorating, and we will probably meet at events of this size for some time to come. Thanks to the courage of the organizers for not giving up. Evenings like these show how much live music is needed. That energy is absolutely irreplaceable, captivating and recharging.

LIVE: Country is alive! The Dead South was dominated by the sold-out Forum Karlín